7 Bikes and Riders assembled at HD of LC for the 11/10/2018 Monthly ride. Lead Road Captain for Pickett House Ride was not able to attend, so we changed our destination to C'est Bon restaurant in Mementau. Temps in the lower 50's for the day.

​     12 Bikes and 14 Riders ​ ​met @ HD of LC for the Jennings Veteran's Home Benefit Ride. They departed HD of LC at 8:30am to ride to the Veteran's Home. They continued on the benefit ride from there. After the 2nd stop on the poker run, they peeled off and stopped by DC's in Eunice for lunch. Great day for a ride!

10 Bikes, 13 Riders met @ HD of LC for the December Ride. Cest Bon Restaurant in Mermentau was destination decided. Upon early arrival Cody Reeves led us on a backroad loop through Morse, Gueydan, Lake Arthur before returning to Cest Bon for lunch. Roger Sutherland was lead Road Captain, Bonnie Gilley served as sweep. We returned to HD of LC @ 2:30pm to gather up more bikes and ride to K-Mart on Ryan St. to deliver a truck load of toys to the Well Connected Riderz group. Great cause!

excursion. Departed at 9:00am, road Holbrook Park Rd to Dequincy for a break. Continued to 398,  then 109 to DeRidder for lunch at Cecil's Restaurant. Johnny Beaugh served as Lead Road Captain, Roger Sutherland was sweep. Returned via 171 to beat the afternoon showers, great day to ride. 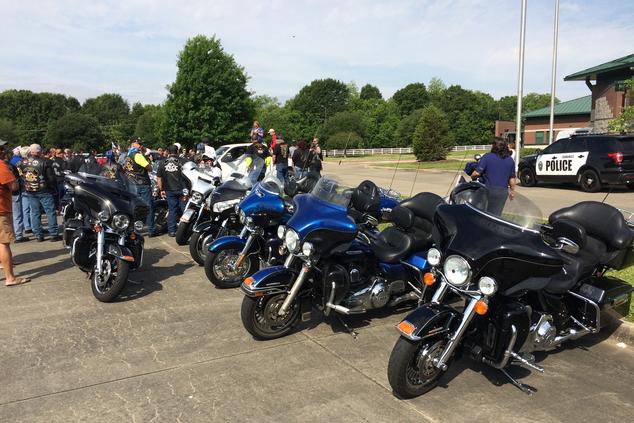 ​     ​Saturday May 12th ​​8 Bikes and 10 Riders met @ HD of LC for the afternoon ride to Larry's French Market in Groves, Texas. We departed @ 2:00pm for a afternoon ride through Hackberry, along the coast and northward to the destination. Barry and Paulette met us at the restaurant to enjoy a meal and fellowship with the group. No pictures submitted at time of publishing.

2 Bikes and 2 Riders met @ HD of LC for the 6/8-9/18 Jena Loop Overnighter. Departed @ 3:15pm for a shady backroad route to Jena. Supper at La Cabana Mexican Restaurant just west of the Hotel. On Saturday we continued the Jena Loop route with morning temps in the lower 70's. We modified our return trip home to include some uncharted highway 8 to Leesville, then 171 home. Roger Sutherland served a Lead, Red Lester served as sweep for a pack that did not exist. 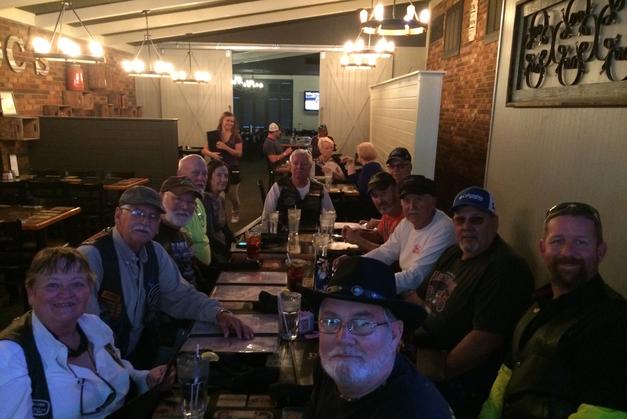 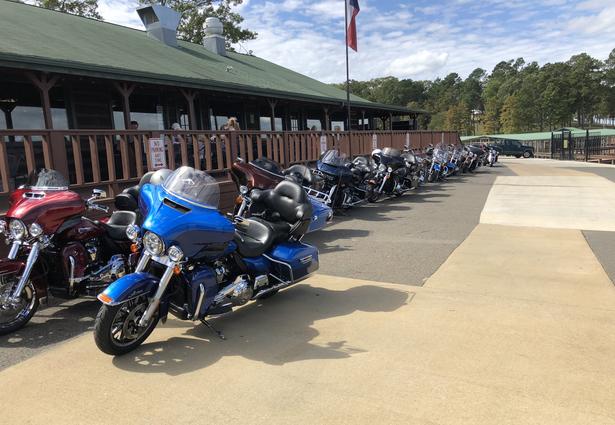 Special Thanks to Linda Norberg as Activity Officer for our 2018 Christmas Party. Magician, Music, Food & Fun!!!

​16 Bikes met at HD of LC for a lunch ride to Rodair Roadhouse in Port Arthur, Texas. Pleasant temps and blue skies were enjoyed by all. Pictures pending for this ride.

10 Bikes, 12 Riders met @ HD of LC for the 8/25/2018  Rider's Choice. Destination decided was the Roadair Roadhouse in Port Arthur.  We took 27 south out of Sulphur to 82 along the coast, 73 into Port Arthur and Jade Avenue to the restaurant.  Gabe Broussard was our Lead Road Captain, Red Lester served as sweep. Great day for a ride, no pictures submitted at time of publishing.

2 Bikes, 3 Riders met @ HD of LC for the 9/22/2018 Ride to the HOG Bar B Que. A rainy morning with dismal forecast. We departed anyway, made the loop along Topsy/Bel Road, through Reeves, 113 to 394, to 171 South. We aborted the route through Dequincy due to dark clouds and proceeded to Moss Bluff and over to Holbrook Park destination. It was an enjoyable ride/cruise. #1686 now has it own official Navy!!! Roger Sutherland served as Lead Road Captain, Red Lester served as sweep. Roger's wife Sherry rode 2 up with him, so we will consider her "the pack".....lol.

​​7 Bikes and 7 Polar Bears showed up at HD of LC for the January Ride. ​ ​Destination was Robert's Restaurant in Orange, Tx.. Jane Allums stopped by the dealership to take a head count of riders in need of counseling for attempting to ride in this kind of weather. 9:00am departure temps were in the mid 30's as we rode north to Longville, west to Merryville for a butt/warmup break. Proceeded west to Hwy 1416 to Hwy 87, back south to Orange. Jerry Guillory was lead Road Captain, Red Lester served as sweep. After lunch we enjoyed a return trip back to Lake Charles in upper 50 temps. I would do it again tomorrow, Ride Hard!

​February 10th Ride cancelled due to rain, rescheduled for Sat. February 17th. On the 17th 8 bikes and riders met @ HD of LC under overcast skies and mild temps. We departed @ 9:00am and rode a winding route to Simply Country in Moss Hill Texas for lunch. During lunch light rain started falling. We returned riding in and out of several showers, they did not cease until we reached Dequincy. Cody Reeves was our lead road captain, Randall Herbert and Red Lester served as sweeps. No pictures submitted at publishing time, if you have any feel free to submit them to roger_sutherland@bellsouth.net. 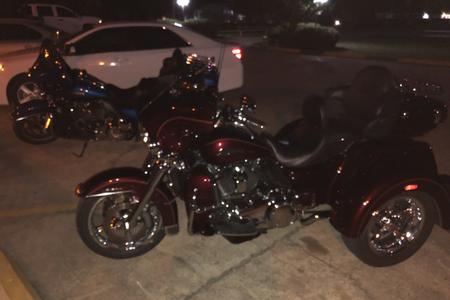 5 Bikes, 6 Riders met @ HD of LC for the 8/11/2018 Monthly Ride. With rain in the forecast we decided to take a back road route to Fat Boy & Skinny's rather than the original plans to ride the Toledo Bend Loop. Good thing everybody had their rain gear. Johnny Beaugh was lead road captain, Red Lester served as sweep. Thanks Connie for getting the pics to me!

11 Bikes and riders met @ HD of LC on a foggy Saturday morning 11/24/2018 for this month's Rider's Choice. Destination decided was DC's Sports Bar and Steakhouse in Eunice. After lunch most proceeded north on Hwy 13 to Mamou, then Hwy 10 W to Pitken for the return trip home via Hwy 113 S to Hwy 190 W and Topsy Bel Road. Johnny Beaugh was Lead Road Captain, Red Lester served as Sweep. Great ride! 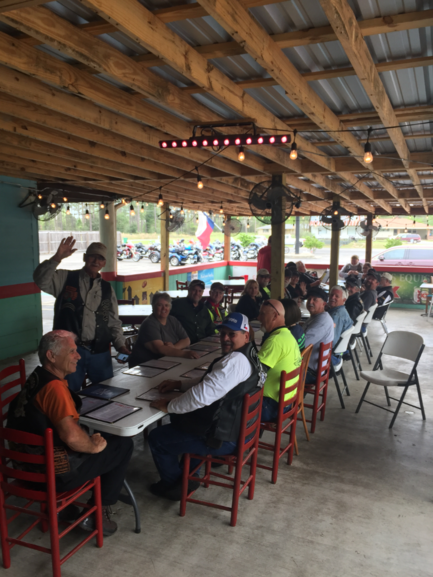 ​     Sunday May 6th 8 Bikes, 12 Riders met @ HD of LC for the Breast Cancer Awareness Ride sponsored by the Cajun HOG Chapter. We departed at 8:30am, rode to the Butte LaRose rest area to meet up with three other chapters from around the state. Cajun HOG led us on a loop around the Atchafalaya Basin back roads ending at Pat's of Henderson. LC HOG proceeded to Landry's Seafood for lunch and return trip home. Over 100 bikes total, sunny skies for a nice day of riding. 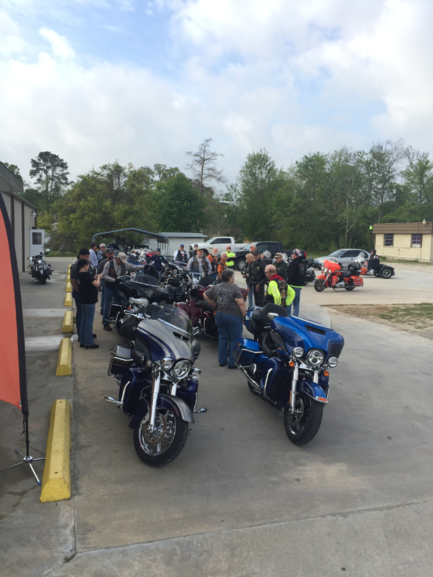